Contrary to how it may look, I'm not actually standing on the horizon...

Other Stuff To Look At

Digger
Tyabb, Victoria, Australia
I'm currently a theology student, trying to make sense of my life as a follower of Jesus, a footballer, a youth worker and massive Simpsons fan. I'm interested in exploring new and different ways of understanding God and church, and particularly how the person of Jesus is relevant to me and the people I hang out with. I love living down in Tyabb and playing for the mighty Yabbies, which rumour has it is the best club on the Peninsh. I love connecting with and seeing young people reach their full potential in life, which sounds very hippy i know, but its what I'm all about.

Before i go I thought I'd better impart some of my new found wisdom on the world.

So, the aim is to get the Government to give 0.7% of our Gross National Income, we currently give about 0.28%. Second worst in the developed world. Which is kinda strange considering that individually we're the second best givers...

Be good if our Government's actions were in line with the people on this one...

Australia would only have to give another 30% of our massive $13 billion budget excess to reach 0.7%.

They have worked out that the bare minumum it costs to live in the world is $1.08 cents a day, and if all the developed countries gave their 0.7% every year every single person would be at this standard. This cost includes food, paying for infrastructure, medical etc etc. That works out to be $124 billion. Not much out of the combined income of the 21 richest countries-20 trillion dollars!
Posted by Digger at 11:30 pm 5 comments:

Face Up To Poverty

Crap! I posted a big long thing explaining all this then my computer lost it!

So, in a nutshell, this is a new Make Poverty History campaign where you send in your face instead of just a signature, to try and get he Government to give 0.7% of our Gross National Income to world poverty issues.

And the link should be now fixed.
Posted by Digger at 11:25 am 7 comments: 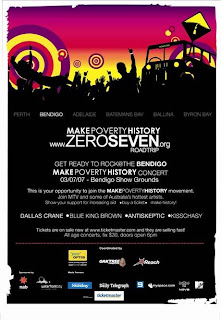 This concert is gonna be pretty sweet, pretty decent bands playing, plus it's a great cause, so even if you're not in the area you should come down and get amongst it!
Posted by Digger at 10:21 am 2 comments:

Was chatting to somebody over the weekend about whether or not God makes us feel guilty when we do something that's not the way God intends it.

See I reckon guilt never comes from God, but from ourselves and others. I reckon guilt is that feeling of self-loathing we get, 'oh man, I'm such a bad person, I'm no good, I'm not worthy of anything, I hate myself' etc etc. And i don't reckon that comes from God at all.

Conviction on the other hand is what comes from God, and that's 'simply the feeling that what ur doing is wrong, not that ur an unlovable, despicable, terrible person because of it, but just that it's not what God wants for you from your life.

I reckon it's a pretty massive difference, and I reckon a lot of people probably get held back by it.
Posted by Digger at 12:02 pm 2 comments:

I was at a training sesh for the MakePovertyHistory ZeroSeven Road Trip thing I'm going on in a couple of weeks, and heard many good and interesting things. One of them was hearing Tim Costello-CEO of World Vision speak.

He was basically saying that the situation in Congo is pretty much messed up, with like millions of people having died due to internal wars and resulting food shortages and such. Pretty messed up, but whats worse, is why they can't do anythitng about it.


So he reckons they could raise say $10 million dollars for the Congo, but because nobody currently knows about it or anything, it would require like $5 million in advertising and media coverage etc, which for those who struggle with maths-is a 50% overhead.

So in that 'industry' the average overheads are 22%, World Vision's being 20%. If they were to get stuck into fundraising for the Congo then they would get absolutely belted by the haters in the media who are always looking for an excuse to talk about how dodgy charities are etc.

It's a pretty terrible situation I reckon, but just seems to be the reality at the moment...
Posted by Digger at 5:26 pm 6 comments:

Felt like posting something but not enough time to think anything through, so just thought I'd chuck up this info I got emailed today. It's a bit American, but the facts still add up.

#2. In 37% of Americans, the thirst mechanism is so weak that it is mistaken for hunger.


#3. Even MILD dehydration will slow down one's metabolism as 3%.


#4. One glass of water will shut down midnight hunger pangs for almost 100% of the dieters studied in a University of
Washington study.


#6. Preliminary research indicates that 8-10 glasses of water a day could significantly ease back and joint pain
for up to 80% of sufferers.


#7. A mere 2% drop in body water can trigger fuzzy short-term memory, trouble with basic math, and difficulty focusing on the computer screen or on a printed page.


#8. Drinking 5 glasses of water daily decreases the risk of colon cancer by 45%, plus it can slash the risk of breast
cancer by 79%., and one is 50% less likely to develop
bladder cancer. Are you drinking the amount of water
you should drink every day?

#1. In many states the highway patrol carries two gallons of Coke in the trunk to remove blood from the highway after a car accident.

#3. To clean a toilet: Pour a can of Coca-Cola into the toilet bowl and let the "real thing" sit for one hour,
then flush clean. The citric acid in Coke removes stains from vitreous china.


#4. To remove rust spots from chrome car bumpers: Rub the bumper with a rumpled-up piece of Reynolds
Wrap aluminum foil dipped in Coca-Cola.


#5. To clean corrosion from car battery terminals: Pour a can of Coca-Cola over the terminals to bubble
away the corrosion.


#6. To loosen a rusted bolt: Apply a cloth soaked in Coca-Cola to the rusted bolt for several minutes.


#7. To bake a moist ham: Empty a can of Coca-Cola into the baking pan, wrap the ham in aluminum foil, and bake.
Thirty minutes before ham is finished, remove the foil, allowing the drippings to mix with the Coke for a sumptuous brown gravy.


#8... To remove grease from clothes: Empty a can of Coke into the load of greasy clothes, add detergent, and run
through a regular cycle. The Coca-Cola will help loosen grease stains. It will also clean road haze from your
windshield.

#1. the active ingredient in Coke is phosphoric acid. It will dissolve a nail in about four days. Phosphoric acid also leaches calcium from bones and is a major contributor to the rising increase of osteoporosis.

#2. To carry Coca-Cola syrup! (the concentrate) the commercial trucks must use a hazardous Material place
cards reserved for highly corrosive materials.

#3. The distributors of Coke have been using it to clean engines of the trucks for about 20 years!

Now the question is, would you like a glass of water?

Just the other day I was talking to some friends who are in a similar sort of smaller church community to me, very much like the Huddle.

One girl was talking about how she was loving being in her new community, because having come out of a larger church she was just loving having more time to connect with those outside the church, get involved with her community and other mission type stuff.

The other dude was talking about how he was loving it because it just free'd up his weekends so he could pretty much do whatever he wanted, and didn't have to be tied down with church stuff.

I was thinking about it afterwards, and have spoken to them since, cos I just really felt the second dude was missing the point. For me, yeah it's great not being tied up with as much church stuff as i may have been in the past, but thats not about my wants for spare time, it's because it gives me more time to spend with people outside the church etc.

I just reckon it's a really key difference, and I'm a little over people who are just into the EC church scene cos it makes them feel nicer, thats just not the point.
Posted by Digger at 10:24 am 3 comments:

Interview in the 'Australian Christian'

A couple of weeks ago I did an interview for the Churches of Christ online magazine thingy-which is a pretty decent read, which was a bit of fun, and if you follow the link above you can have a look.

Nothing special really, just me rabbitting on about what I do, the Huddle, and a few other things like that.
Posted by Digger at 12:39 pm No comments:

Although we didn't clean up as many trophies at SYG this year, we had an absolute ripper time!

This year, for no apparent reason, we went as West Footscray Baptist Church, which meant that for the past 3 years we've won the Rec Footy, but all under different names! A great effort by our super coach Flacky who donned the boots and boxer shorts despite having a broken arm! Great efforts by Zoe, Kerry n Flacky who presented well in the forward line all day...

Our Netty team also smashed it, with some great efforts down back by Belinda "played in both our premierships' Renouf, our team mascot Jill 'The Panda' Konig through the middle and Jesse 'Plugger' Taylor up forward.

Our touch rugby, ultimate frisbee and dodgeball teams all suffered devastating losses in over-time of their finals, so clearly our mental toughness was not up to scratch. Had better put in a bigger pre-season next year...

We finished about 23rd overall, which was solid, and had just a couple too many people to win Small Church again, but thats all good.

Frankston Church of Christ were once again fantastisch in letting us eat with them and what not, worked really well.

Will write more later on speakers and night programs n such.
Posted by Digger at 12:05 pm 5 comments:

For those overseas friends who have been wanting to check out my tomfoolery on 1vs100, or anybody else really, then here are the links! Thanks Gareth!

My first goal in 7 years!

You beauty! I think I may have kicked one about 5 years ago in the Reserves, but the last one I definitely kicked was in my very first game of U/18s was back in 1999! Since then I've only spent 5 quarters in the forward line out of like 7 seasons of football! But I love playing in the backline, told the coach that he better not take this as a sign to play me up there in the future, it's just no good.

May allow myself to drift forward in SYG Rec Footy this year, but other than that, backline is the way to go for me.
Posted by Digger at 11:53 am 5 comments:

What's with this Madeline chick?

Am I a little insensitive to be annoyed at the mass media coverage this little girl gone missing is getting? Why is she any more important than the thousands of other people who go missing worldwide? Why don't we see this much coverage for any kid that goes missing? Why is she so important?

Perhaps I'm a little cynical, but it just annoys me when everybody tries to get on board and pretend they care about this, when if they really cared about missing people they'd be sending emails around all the time...
Posted by Digger at 11:49 am 4 comments:

Apparently that old wives tale about not mixing red clothes with white is actually true... Enough said!
Posted by Digger at 11:47 am 6 comments: