Contrary to how it may look, I'm not actually standing on the horizon...

Other Stuff To Look At

Digger
Tyabb, Victoria, Australia
I'm currently a theology student, trying to make sense of my life as a follower of Jesus, a footballer, a youth worker and massive Simpsons fan. I'm interested in exploring new and different ways of understanding God and church, and particularly how the person of Jesus is relevant to me and the people I hang out with. I love living down in Tyabb and playing for the mighty Yabbies, which rumour has it is the best club on the Peninsh. I love connecting with and seeing young people reach their full potential in life, which sounds very hippy i know, but its what I'm all about.

Man I've been way slack on this lately, haven't even started to explain my Holy Spirit weekend from a couple weeks back.

Anywho, as a follow on from my meeting up with them a while back, my street-preaching friends invited me round to their joint for tea one night to watch this DVD that they felt was really important and had challenged their ideas about evangelism n stuff. Although I'm not generally a fan of the SP gear, i'm always open to different ideas and to hear why others think what they do.

So we ended up watching this DVD, just them, me, their minister and another guy from their church.

It ended up being less about why we should street preach, but more about the theology of why they do, so that was cool.

I said I was very wary of 'lifeboat theology' which they acknowledged, which was cool.

The rest of the DVD was based on two presuppositions, neither of which i'm convinced of:

That we will all be judged by God using the 10 Commandments as the sole guideline. (Forgot to ask where exactly in the bible they got that from. You can make a good case for judgement, but am not sure The Big Ten are the sole basis).

The other is that the best way to convince people to be come Christians is to convince them they are a sinner and have broken aformentioned Big Ten. Again, not convinced. Not something Jesus seemed to do a whole lot of.

No mention of the Kingdom of God, which considering it was the thing that Jesus talked about more than any other, seemed a little strange.

I relaise this 1 Hr video does not contain all of this church's beliefs and theology etc, but can only write on what I have seen. I only really talked with one minister from their movement so can not really make an accurate judgement.

Anyways, we had some great discussions about it all, and hopefully learnt a little from each other, and had great pizza. Was all good!
Posted by Digger at 11:43 am 11 comments: 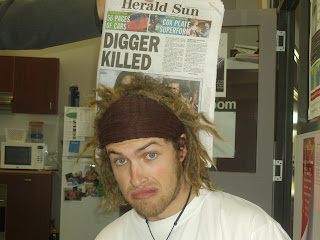 I was shattered to learn of myown demise!
Posted by Digger at 12:52 pm 4 comments:

Were having many interesting discussions last night at the Huddle, one of which centred around the story of Peter walking on water, and what we have faith in etc. This then somehow lead on to healing, and Christian people that have the gift of healing etc, which was quite interesting, as I'm currently writing an essay on that subject.

Anywho, I mentioned that I think it is OK to be skeptical about that sort of stuff, it is real, but does need to e taken witha grain of salt, as there are also people out there who fake it and manipulate it etc-either willingly or unwillingly.

But I also think, in my experience, being cynical, can just be a negative in your own life. I've found if I'm too cynical about stuff like that, i can shut myself off to the fact that God is bigger than what I understand, it means my concept of God is in a box.

I'm still skeptical about a lot of stuf that goes on in the Christian world, but am finding cyncism less andless helpful, as I'm the one who loses out.
Posted by Digger at 11:00 am 3 comments:

At the suggestion of a couple of friends, i have finally got myself around to getting onboard with Red Frogs this year, which is gonna be mad.

For those who don't know, Red Frogs is basically a ministry to schoolies (kids who've just finished yr12) at different schoolies week locations all across Australia.

Basically you go down there and hang out witht he schoolies dudes, giving them red frogs, water and other food stuff to make sure they have something in their system other than drugs and alcohol.

You walk them home from the pub to make sure they're safe, or call taxis or whatever if need be. You play beach crciket and provide other alternate activities other than drinking, clean up their mess,a nd generally provide some pastoral care and support for them when things turn bad-as more often than not they do at schoolies.

You're just there serving a need, being the hands and feet of Jesus and helping out in any way possible. Definitely my style of ministry.

Out of season Collingwood joke, but still funny

Thanks to DJ Harrogance for this one.

A primary teacher starts a new job at a school in Collingwood and, trying to make a good impression on her first day, explains to her class that she is a Collingwood fan. She asks her students to raise their hands if they, too, are Collingwood fans. Everyone in the class raises their hand except one little girl.

The teacher looks at the girl with surprise and says: "Mary, why didn't you raise your hand?"

"Because I'm not a Collingwood fan," she replied.

The teacher, still shocked, asked: "Well, if you're not a Collingwood fan, then who are you a fan of?"

"I'm a Richmond fan, and proud of it," Mary replied.

The teacher could not believe her ears.

"Mary, why are you a Richmond fan?"

"Well," said the teacher, in an obviously annoyed tone, "that's no reason for you to be a Richmond fan. You don't have to be just like your parents all of the time. What if your mum was a prostitute, your dad was a drug addict, and your brother was a car thief, what would you be then?"